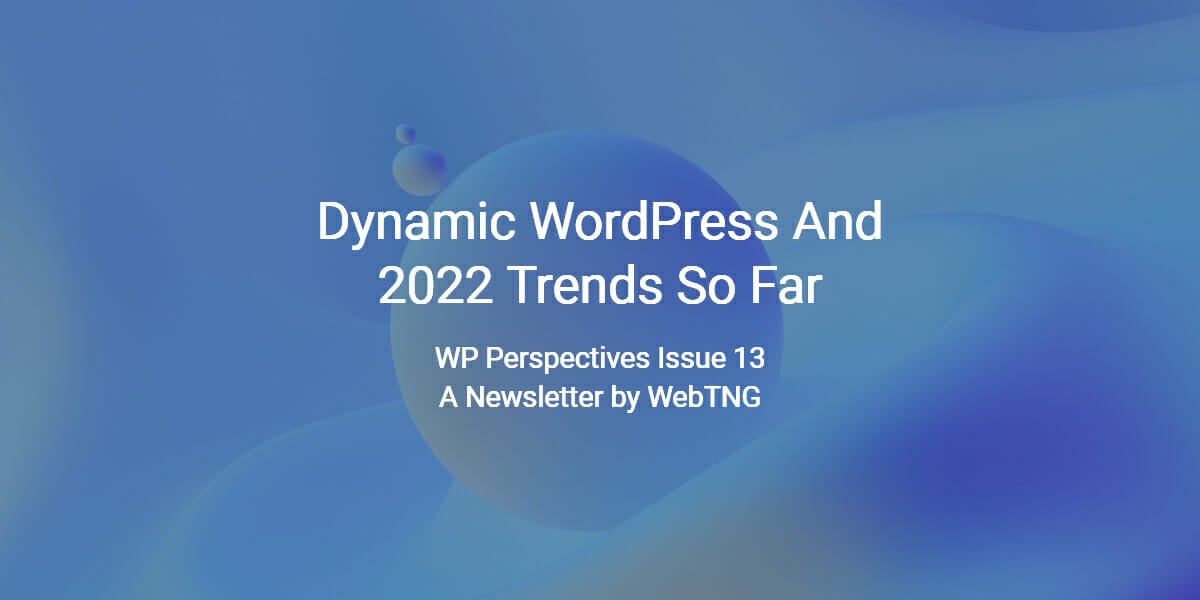 In this issue we look at some interesting trends in relation to dynamic data and custom fields plugins. Also, the latest posts on WebTNG and some useful links from around the web.

Dynamic WordPress And 2022 Trends So Far

Back in the day there was an old saying that you never got fired for recommending IBM. The idea was that IBM was the market leader and a safe default. The same has essentially been true for Advanced Custom Fields. The free version of ACF has more than 2 million active installs and ACF is supported by more builders and tools than any other custom field option. So when someone asked which custom field plugin they should use, ACF was a safe reply.

A little over a year ago ACF was sold to Delicious Brains, who had a reputation for building good developer tools. There were some missteps related to honoring lifetime licenses, but after a while the team seemed to hit their stride and were releasing nice incremental improvements, mostly related to ACF blocks and the Full Site Editor. Then almost exactly a year later Delicious Brains sold ACF and some of their other plugins to WP Engine. It is likely that WP Engine will be a good shepherd and ACF will continue its run, however, when a product changes hands then its users get an unsettled feeling and begin to worry.

Of course ACF still has millions of active installs and wide support, but here is an eye-opening 2022 trend:

Meta Box was designed in a very modular fashion and for a long time had been seen as a tool for developers and power users. They slowly added more GUI front-ends making it easier to use and they also provided their own page builder extensions. It was still far behind ACF, but Meta Box had made serious progress. For example, late 2021 there was a good Oxygen integration. It seemed to me that the team managed to thread the needle and keep Meta Box fast, lean, and developer friendly, while also bringing it into the mainstream. That work paid off this year as more tools added support.

Crocoblock’s JetEngine has a lot going for it, but for a long time there was a worry that if you used it then you were locking yourself in to Elementor. However, the Crocoblock ecosystem is very extensive and Nelson Therrien, a long time Toolset / Elementor expert, switched to JetEngine for all his projects. His assessment was that once you learned their way of doing things JetEngine was a very good solution.

The Crocoblock team has been adding support for Gutenberg, and JetEngine comes with some Gutenberg blocks. In April they released JetThemeCore support for Gutenberg. JetThemeCore is their theme builder which previously only worked with Elementor. The April release means that you can use JetEngine with the Full Site Editor. Prior to 2022, support for JetEngine by other tools was very limited. Third party support is still behind even Meta Box, but increased Gutenberg support and the integrations this year moved JetEngine out of being a niche offering.

I think all of this is to say that ACF’s lock on the market is coming undone. Users benefit from all of the good offerings. Wide support for custom field plugins means we have more tool choices and we are freer to switch tools as needed.

Pods also has some 2022 news. Pods had no significant development for 4 years. Pods version 2.7 was released in December of 2017 and Pods 2.8 came out late 2021. I wondered if they were going to be able to sustain momentum, but there are signs that Pods is back on track. Earlier this month the 2nd beta of Pods 2.9 was released with support for repeater fields. It seems that the team has got its mojo back.

The elephant in the room is Toolset. Yeah, what about Toolset? Toolset has been around for a long time and is a soup to nuts solution that includes custom fields, Custom Post Types, the ability to create templates for post types and archives, advanced queries (Views), front-end faceted search and more. Toolset had a reputation for being the best choice for large, complex projects and for covering more edge cases than other options. Toolset advertised itself as the no-code solution for Custom Post Types and custom fields. A catch-22 for Toolset was that it was so flexible and powerful that many sites built with it were unique custom solutions that required developer skills and access to support. Support is a major cost center.

Toolset users were asking for integration with various page builders, and we know how page builders seem to be multiplying, so staying current with 3rd party builders was an endless task. As Gutenberg started to mature Toolset pivoted and spent over a year developing Toolset Blocks, a Gutenberg version. This really looked like a brilliant plan. After all, Gutenberg was the builder that comes with WordPress core, so it seemed they could stop chasing 3rd party builder support and just go with Gutenberg. Also, Gutenberg blocks were much more of drag and drop GUI based solution than the old Views version, so the need for a developer and for support should diminish. Toolset Blocks version 1 was released in December of 2019. Over the next few years Toolset steadily brought over features from Toolset Views.

Users noticed that new development had stopped, there was no communication about what was being worked on, and no new training materials were being produced. The regular production of training materials has been a long time content marketing strategy. Users asked what was going on and in mid June of this year Toolset replied. They announced that they were pausing new development for 18 months in order to access the impact of Full Site Editing on Toolset. After that time they would determine a direction. Presumably sales had significantly fallen off because they mentioned a few times in comments that they had run the numbers and needed to determine what was financially feasible. Michael Edwin has predicted that the downward economy would impact WordPress companies. Here was an example.

We know that WordPress core has never provided support for 3rd party custom fields and it is extremely unlikely that it will do so in the future. This means that there will always be a need for solutions like Toolset. However, Toolset may have put themselves in a squeeze. On the one hand, a significant number of their users still preferred page builders, which Toolset had turned their back on. This meant that it was frustrating trying to use Toolset with the likes of Elementor or Oxygen. On the other hand, the Full Site Editor was disruptive. It takes extra programming to make blocks that work in Gutenberg the content editor also work in the context of the Full Site Editor. Further , developers have complained that they have to regularly scramble to fix their products because of breaking Gutenberg changes that are not well communicated or documented. Toolset was wary of trading chasing their tail for page builder support for chasing their tail for Gutenberg support, so they did what a number of other developers have done and decided to wait for the Full Site Editor dust to settle.

We can applaud Toolset for their transparency, but the way the announcement played out was a marketing blunder as it raised doubts about the long term viability of the product. In the comments the Toolset team mentioned that they saw the Full Site Editor and things like the Query Loop Block as being direct competitors. From my perspective, this is odd as the core Query Loop Block pales in comparison to Toolset’s own solution. However, if Toolset saw a drop in sales they may have attributed it to these core enhancements. There is perhaps another explanation. Many third parties, who had previously only nibbled at Toolset’s core features, were now coming out with easier to use and more performant options. As far as page builders go, theme builder features are now ubiquitous. Further, the ability to create templates for Custom Post Types is now commonplace in block offerings: Kadence, GeneratePress, The Plus Addons, and Cwickly are built on top of Gutenberg. Toolset has lost much of its competitive advantage.

This look at the 2022 trends is a long winded way of saying that there has been a shift. WordPress is going through a period of major changes. Consequently, no one wants to be locked into one builder solution. The default answer to the question of which custom field plugin solution to rely on used to be ACF. Now it is ACF or Meta Box. JetEngine, once a niche option, is now something to watch and people who used it with Elementor can now leverage that investment and use it in other contexts. Pods has come back to life and Toolset is is on hold.

If you are curious about which custom field solutions different builders support, you can check on the WP Dynamic Data website. I’m currently adding in the block-based solutions.

Cwickly is a new and powerful solution for working with dynamic data. It was designed to work with the Full Site Editor.

Kadence released some new blocks, but there wasn’t documentation, so I did some walk-throughs.

New Plugins and Interviews from Members of Dynamic WordPress

A poll in the Dynamic WordPress Facebook Group found that 25% of the members were plugin or theme developers. We thought it would be nice to share their achievements. Doubly is a new plugin for easily copying between sites from Amit Keren of Unlimited Elements.

Lương Phước is the Piotent Founder. They recently released a big update to their forms plugin.

Ron Huereca is a member of the Dynamic WordPress group who reached out to me about his new QuotesDLX plugin.

I did a series looking at WordPress admin customization plugins.

Other Posts, Reviews, and News

I’ve been waiting on the Bricks Builder to add display conditions and then I’d like to take another in-depth look.