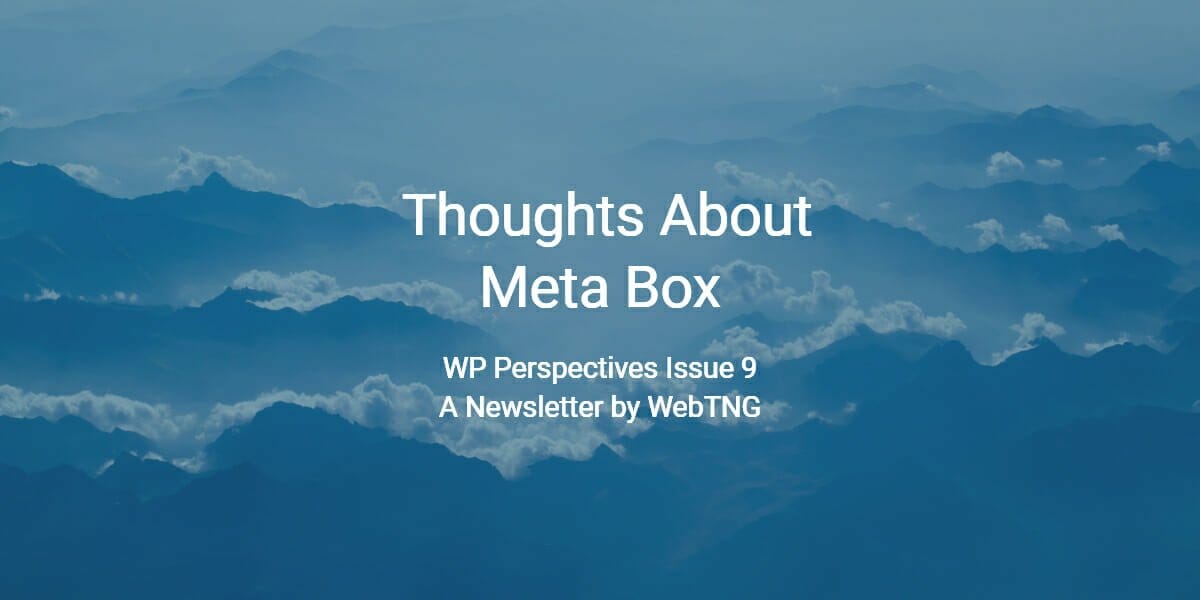 In this issue: I share some thoughts about Meta Box. Also, the latest posts on WebTNG, and some useful links from around the web.

When technology reaches a critical mass of adoption then it is recognized as mainstream.

Join me at the Page Builder Summit

I’m speaking at the Page Builder Summit on Wednesday the 20th of October about Theme Builders. I’m looking at five different options – kind of like page builder speed dating. Get all the details and grab your free ticket here.

Back in 2014 I surveyed the various options for creating Custom Post Types and custom fields and settled on Toolset. I used it almost exclusively for 5 years, but still followed the changes and updates of other tools. A few years ago I started using Advanced Custom Fields. I even switched a few sites away from Toolset as I was using a page builder for frontend display and ACF had better support, was simpler, and felt lighter. Lately I’ve been paying a lot of attention to Meta Box and have published a few tutorials about it. The last two sites I built used Meta Box. In this issue of the newsletter I wanted to share some of my observations and thoughts about Meta Box that I hope you find interesting.

I may be making too much of this, but my impression is that Meta Box started out as more of a developer tool. It is very modular and in the early days it required some code to use. Consequently, I considered Meta Box to be a developer-centric solution and not mainstream. Over time more visual interfaces have been added and a couple of years ago the Meta Box All in One extension was released. The All in One extension doesn’t make Meta Box less modular, it is just a wrapper to make it easier to install and use the modules. These two shifts, a visual interface, and easier use, makes Meta Box more appealing to those who don’t want to work with code.

I’ve always found the Meta Box team to be very polite and helpful. I’ve shared feedback and ideas with them. I’ll drop two screenshots here from WordPress.org and you can draw your own conclusions.

With a lower market share plugin developers were not motivated to add Meta Box support. As a consequence, Meta Box created their own addons.

And then an interesting thing happened after Meta Box hit 500,000+ active installs. The Bricks Builder launched with support for Meta Box.

The Piotnet Grid Builder launched with support for Meta Box.

What Does It All Mean?

Meta Box has performed an impressive balancing act. It appeals to developers and is easy enough for most site builders. Its modularity has made it easy for the developers to extend so that the Meta Box team could fill in the gaps where 1st party developers didn’t. It has maintained a lifetime license option while offering competitive annual pricing. After Meta Box passed a half million active installs there seems to be a shift such that product developers are adding support on their own and the Meta Box team is not having to create an extension. This all has me wondering if perhaps Meta Box has achieved a critical mass and is now a mainstream solution. What do you think?

Stackable version 3 will soon be released. This looks like an epic update. I can’t wait to try it out.

Also in the blocks world, The Plus Blocks for Gutenberg and its Nexter theme have been released. The blocks addon has a huge number of features and the theme looks to be developing into a new theme builder. I’ve been testing it out for the past two weeks and plan to review it when it is ready.