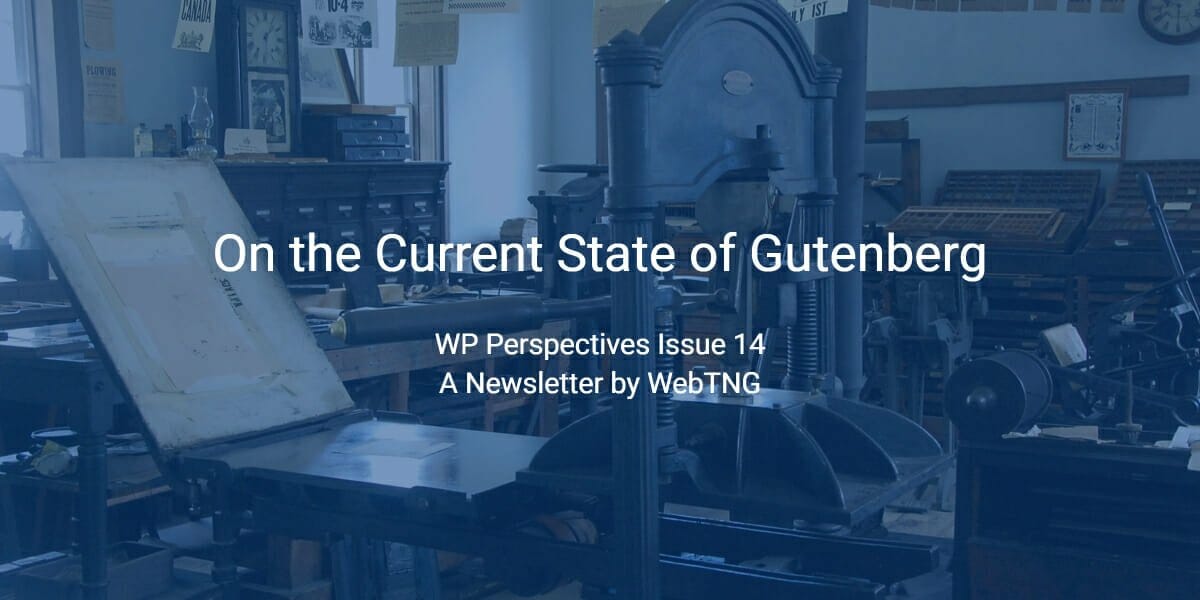 In this issue we look at some interesting developments related to Gutenberg. Also, the latest content from WebTNG and some useful links from around the web.

Dynamic WordPress: On the Current State of Gutenberg

The Continental Divide is significant because it separates the direction that a continent’s waterways flow. In North America, on one side of the divide, rivers flow into the Atlantic Ocean and on the other into the Pacific. A paradigm shift is a fundamental change in the basic concepts and practices of a discipline. People change the way they view something. Perhaps you are getting the hint that I think there has been a fundamental shift in the status of the Gutenberg project. If so, you’re right.

Support for Fluid Typography, the ability to create templates for Custom Post Types in the Site Editor, Featured Image support in the Cover block, border controls for the Image and Columns blocks, and updates to the Navigation block are all coming in 6.1. These are all great improvements.

When Gutenberg was first released it did not include a columns block. Big blunder. As a result every block collection offered their container blocks. However, core block containers have been improving. You can now create pro page layouts using the columns block. Further, did you know that Gutenberg core will include basic Flex Box support. Wait, what? That’s right, the implementation is basic, but it is intuitive and easy to use. Check out the Group, Row, Stack, and Columns blocks in WordPress 6.1. You heard it here first folks.

All of the above improvements suggest that we are getting close to the point where you don’t have to use 3rd party blocks for everything. Core blocks are growing up. But wait, there is more.

Much has been made about the new block-based themes. They are light weight and have jettisoned the baggage and overhead of “classic” themes. There is no doubt that they have caught the imagination of WordPress designers who are excited about this new type of theme. As of this writing, there are now 160 block-based themes in the WordPress directory.

There has also been a lot of talk and excitement about the new Site Editor. It lets you create display templates using drag and drop Gutenberg. On the lead up to WordPress 5.9, which introduced the Site Editor, the big general purpose “classic” themes like Kadence, Blocksy, and others promised they would add “hybrid” support so you could use the new Site Editor with them. This has not materialized. Theme developers felt “it was not ready yet” and no doubt they were worried about confusing their users. After all, Kadence has a good “theme builder” in the pro version, which by the way is also Gutenberg based.

In September ThemeIsle released the pro version of its Gutenberg block collection, Otter Blocks Pro, which has support for dynamic data. At the same time they also released Raft, a block based theme. This is huge. Remember that ThemeIsle has not one, but two themes in the top 10 list of free themes in the WordPress theme directory: both Neve at number 5 and Hestia at number 9. ThemeIsle didn’t confuse their users or sit on the sidelines, they released a block collection and block-based theme that work great in the Site Editor. They are the first big established theme shop to do so. Boom.

Cwicly fully embraced block themes and the Site Editor with dynamic data, ACF Pro, and a full toolbox of block functionality rivaling advanced page builders. It is Criminally Underrated. Speaking of ACF, it was updated to work in the Site Editor. Likewise, Stackable Blocks made sure that their pro version works in the site editor. Yet despite many improvements, new themes, toolkits, and the Site Editor, what makes a new paradigm significant is when you can do somethin using it that couldn’t be done before.

Custom Post Type support was added to WordPress in June 2010. For the past twelve years you needed to code the templates by hand using PHP or use a pro builder. So called “theme builders” are a central pillar of premium page builders. On October 4, 2022 and from that day onwards it is now possible to create single and archive templates for Custom Post Types for free in the Site Editor using Gutenberg. A WordPress user can download a free theme from the theme directory and a free plugin from the plugin directory to create their Custom Post Type templates with access to custom fields. The free version of GenerateBlocks, version 1.6.0, supports both the Site Editor and dynamic data / custom fields.

There has been a lot of drama surrounding the Gutenberg project. It was added to core early, there were questions about removing the Classic Editor, fans and WordPress leaders pushed the inevitability of the block editor and the death of page builders, turning a lot of people off. We know those types of pronouncements are enthusiastic hyperbole. The TinyMCE editor will be present in WordPress core for a long time to come and page builders will also continue to be an option, and some of them will thrive. I’m not suggesting the death of anything or that site builders should use any specific tools, but there has been a change that will be significant going forward.

You can now create theme templates for Custom Post Types using WordPress core and free themes and plugins. The new user coming to WordPress isn’t going to know or care about old #WPDrama. They will be delighted that they can realize their project dreams using the world’s leading content management system, pretty much for the cost of hosting. That’s democratizing publishing.

A recent poll in the Dynamic WordPress Facebook group listed the 19 most installed Gutenberg block addons, as well as an option for “I only use core blocks.” People were asked which ones they use and would recommend. Another option at the top was “I don’t use Gutenberg,” which got 17% of the responses. Seventeen percent is a big number but so is 83%. This is a big shift. Even just a year ago there would been many more people not using the block editor. Gutenberg is now widely accepted.

I’ve listed out a lot events and changes. Some of them happened over this past year, but many of them just recently. All of which go to support my view that I think it has happened. Gutenberg has crossed over the divide, there has been a paradigm shift, or whatever words you want to use to say that the promise of Gutenberg is no longer theoretical.

Do you think I’ve got it right, am stating the obvious, or have I totally missed what’s happening? Please let me know.

WPCodeBox – This is a code snippets plugin with a number of advanced features. I’m using it on my sites. Use the coupon code WEBTNG for 25% off.
Hoverify – Hoverify is a popular browser extension with tools for developers and designers. It is on sale on AppSumo. I use it every day.
WordPress Lifetime Deals Currently on Sale – A great place to look for deals.

There have been a lot of updates to Bricks, and Cwicly and I hope to take another in-depth look at each of these options.